Shannon Elisabeth gets voted off Dancing with the Stars

Hey all you Shannon Elisabeth fans. This sexy lady got voted off Dancing with the Stars tonight on April 29,2008. Now that she is no longer gonna be part of the show is there any need to watch. I think she should have at least lasted another week, however, it is by votes and she did not make it. Shannon was at the Jimmy Kimmel show with her Dancing with the stars partner Derek Hough. I was able to get a few pictures of this stunning lady. It was a cold evening down in Hollywood and i'm just glad that Shannon was true to her word and made time for the fans that had waited for her till after the show. That was real classy. More importantly for me is that I love poker so I got the chance to ask her if she was gonna be attending this years World Series of Poker(WSOP) main event in Las Vegas. If you wanna hear what Shannon had to say about it make sure you check out my Exclusive video i shot of her tonight.

Well I just wanted to say happy birthday to comedian/actor Jerry Seinfeld. Jerry was born on April 29, 1954, thus that makes him 54 years old today. Jerry is of course best known for the "Seinfeld" show. Most recently his fans have been able to see his work and voice in The Bee Movie. The above picture I shot myself of Jerry Seinfeld at the Beemovie Premiere Oct. 28, 2007. Another good spot to find Jerry is in Las Vegas, he usually does some shows there every year so make sure to look him up should you be in town and Jerry headlining at one of the casino's. Only thing is you might have a sore stomach after one of his shows because it is non stop entertainment filled will laughs!

Teri Hatcher is an aging Beauty

I decided to post this picture that i took of actress Teri Hatcher. I saw Teri at the 7th annual comedy for a cure event that was held at the Avalon, in Hollywood, california on April 6,2008. Teri is now 44 years old and she is starting to look like an aging beauty. The Desperate Housewives star really has alot of wrinkles on her forehead. Is this a sign of worse things to come for Teri. I certainly hope not. I'm not sure if it was an off day for her make-up wise or if the people that do the make-up for the cast of Desperate Housewives really do a great job in making Teri look beautiful on camera. Can you imagine how much make-up they have to put on to hide all those wrinkles on Teri. One can only imagine how Teri Hatcher will look once she reaches the big 50 years old. Feel free to leave any comments.
Posted by curls93 at 12:45 PM 3 comments:

Vince McMahon gets his star unveiled in Hollywood on March 14,2008

Well I decided to attend the star unveiling for Vince McMahon down in Hollywood, California on March 14,2008. I'm bringing this to you now since i recently started this blog. It was a fun day down on Hollywood Blvd. Alot of wrestling fans were on hand to see the WWE Boss finally get his due for bringing entertainment all around the world. Vince McMahon was joined by his son Shane and wife Linda. HHH Hunter Hearst Hemsley was also in attendance. The fans were rowdy as they awaited the ceremonies. HHH gave a great speech, starting off with his famous "ARE YOU READY" and ending his speech with "SUCK IT". Vince gave perhaps the best speech i have heard when receiving a star on the hollywood blvd. Vince thanked all the fans and the granddad's for watching over the years. After this though, Vince gave his heal speech which was absolutely a classic. The fans also changed from cheering Vince on, to giving him a familiar greeting which i cannot write but it ends in hole!! I was dissapointed that some of the other wrestlers' didn't show up to show some support for Vince. Only thing that was missing was for Vince to receive a Pedigree on his freshly unveiled star and then Stone Cold Steve Austin could have given him a stunner for good measure. Now that would have truly been a highlight! Some of the fans were a little dissapointed that Vince and HHH did not sign any autograph's, however, Shane and Linda did make a little time for the fans that had waited for 3 hours to see Vince receive his star. If you would like to check out the video i shot that day go to http://www.revver.com/ then type in curls93. Please bare with me till i figure out how to link my videos directly to my blog.

Well last night was a great night for Canada. It was the first ever pay per view event held in Canada by the UFC(Ulimate Fighting Championship). The event was held in Montreal, Quebec, Canada at the Bell center in Montreal. The headline matchup of the event was Canada's own George "Rush" St.Pierre vs Matt Serra. Serra having dethroned St.Pierre the last time these two fighter's fought was the UFC middleweight champion going in. The crowd was rocking, as the 2 fighter's made their way to the ring the crowd was going crazy for George. As for Matt Serra they booed his entrance into the ring. At the start of the fight George took down Serra and began to ground and pound him for much of the round. Serra was able to get up around 1 minute to go in the first but George put him back on his back. Serra survived the first. For the second round it was more of the same, a quick flurry and Serra was on his back. The referree ended up stopping the fight after St.Pierre was continually striking Serra. The crowd went absolutely crazy when George won and was declared the winner and new middleweight UFC champion of the world. George "RUSH" St.Pierre. It was great because he really deserved the win . It also validated Tito "the Huntington Beach badboy" Ortiz's prediction when i had the chance to ask him who he thought would win the fight. He had told me George. If you would like to see what Tito had to say you can view the video at http://www.revver.com/ then you type in curls93. Please bear with me till i figure how to link my videos directly to my blog. On a last note, congrats to George "Rush" St. Pierre on being a 2 time champion in the UFC.
Posted by curls93 at 7:24 PM No comments:

Patricia Heaton has to pay $$$ to destroy her own pictures

Well I attended the 7th Annual comedy for a cure which was held at Avalon down in Hollywood, California on April 6, 2008. Everything was going fine, the celebrities were arriving and signing autograph's for the few fans that were in attendance. Teri Hatcher, James Denton, Greg Grunberg and many others were in attendance for this great event. Well things got a little sticky when Patricia Heaton arrived. The fans began to ask her for her autograph and she seemed to be happy and started to sign. However, she saw a couple of pictures that she said were illegal so she grabbed them out of a fan's hand and had them destroyed, ripped up. The fan claiming that each picture was worth $5 each was upset and decided that he would call the police. The police arrive and have to decide if Patricia was wrong or not in destroying the 6 pictures. The police came to the conclusion that Patricia Heaton had to pay $30 for the 6 pictures that she had destroyed. I was able to get video footage of the whole thing going down and you can see it on www.revver.com look under curls93. Hopefully soon i can figure out how to put the video's on my blog for the fans to check out directly with the story. Thanks for your patience and feel free to comment on the story..

Well this is one of the photo's I took of actress Jodie Foster at the Nim's Island movie premiere on sunday march 30, 2008. The premiere was held at Graumann's Chinese Theater on Hollywood blvd. I must say that there were alot of fans on hand that day to see both Jodie Foster and her co-star Gerard Butler. Both Jodie and Gerard both came over to sign for there fans. This was the first time I was able to see Jodie since i moved out to Los Angeles. I personally didn't think she would come over to the fans but she proved me wrong. It is always nice to be wrong!! In the picture that I posted with the story she was conducting an interview with the radio show Kiss fm 102.7. Jody is of course best known as the actress who played "Clarice Starling" from Silence of the Lambs. Also her other great performance was in Taxi Driver. Jodie has been in too many movies to name but those are the movies I think she was best in! Let me know what roles you(the reader's) like Jodie in.
Posted by curls93 at 9:09 PM No comments:

Why does Gerard Butler say to slap a man 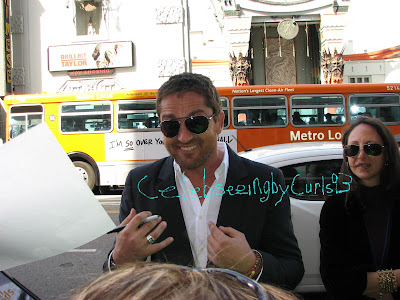 Well I attended the movie premiere of Nim's island on march 30, 2008 at Hollywood blvd, the Graumann's Chinese theater. It was a great day because Gerard Butler came over upon his arrival. Gerard joined the fans as he signed autographs, posed for pictures and interacted. During this time i was able to get some great video of the 300 actor. When he was near me a fan was asking for an autograph, and gerard knew that the man sells autographs for a living. Gerard then proceeds to tell "the fans that before they leave that they should slap the fan because he sells the autographs". Now I know Gerard was only joking but it was great video. He truly is one of the nicest celebrities I've been able to meet since being out in Los Angeles. Not all celebs are so nice to the fans. Also after that Gerard proceeded to sign an autograph on some ladies' sign. After he did that he was running late on time because he had to get back to the red carpet so he posed with the sign he had just autographed for the ladies. If you would like to see the video I shot from the event go to www.revver.com then type in curls93 to see my videos. Look for the Gerard Butler video. Make sure to leave me a note and let me know what your opinion of Gerard Butler is.
Posted by curls93 at 8:44 PM No comments: 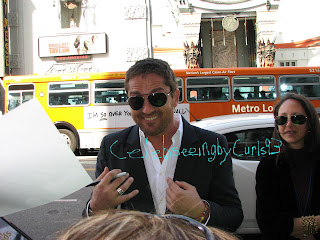 I took this picture of actor Gerard Butler on sunday March 30, 2008 at Graumann's Chinese theater in Hollywood, California. Gerard was there because it was the movie premiere of his latest movie Nim's Island. There were alot of fans there to see him. Upon his arrival Gerard proceeded to cross the street so that he could come over and greet his fans. I must say that he is an awesome guy because he really does take the time to interact with the fans. He posed for a couple of pictures, signed a bunch of autographs and also laughed it up. Gerard's main co-star in this movie is none other then Jodie Foster. I would like to say on behalf of all your fans Gerard, thank you and can't wait to see you again at your next movie premiere!!!!
Posted by curls93 at 12:34 PM No comments: